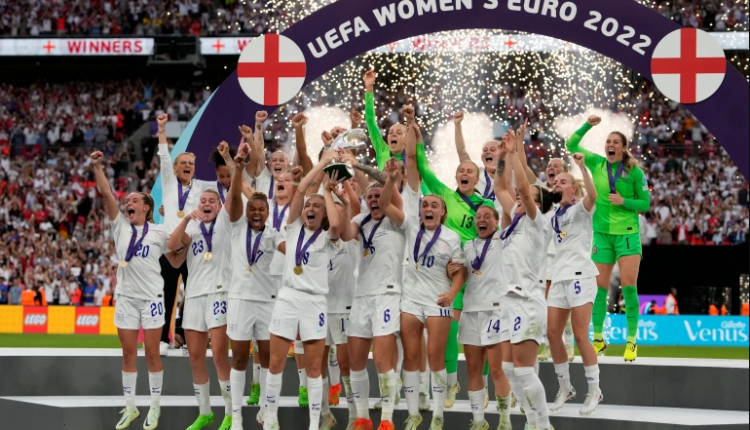 Chloe Kelly wrote her name into folklore by scoring the winner as England beat Germany in the Euro 2022 final, bringing to an end 56 years of hurt by finally winning a major tournament.

A record-breaking 87,192 supporters were in attendance at Wembley as the second-half substitute poked home from close range in extra-time.

England started the brightest and had the better chances to open the scoring, with the biggest opportunity falling to Ellen White. The Manchester City forward peeled off her marker to meet Fran Kirby’s cross, but her header was straightforward for goalkeeper Merle Frohms.

Germany, who were dealt a huge blow before kick-off with the loss of top goalscorer Alexandra Popp due to injury, struggled to provide their usual attacking threat but almost bundled the ball over the line from Lina Magull’s corner delivery after Mary Earps made an important instinctive save to keep out Marina Hegering’s header.

A textbook counter-attack from England almost broke the deadlock when Beth Mead pulled a cross back into the path of White, who, on the stretch, saw her shot rise agonisingly over the bar.

Clearly not happy with her side’s performance, Martina Voss-Tecklenburg swapped Brand for Tabea Wassmuth and her boldness almost paid off immediately as Germany created a huge chance at the start of the second half, but Magull inexplicably failed to hit the target.

Keita Walsh was the catalyst as England regrouped, offering a sense of calmness in midfield – but it was her vision that finally unlocked the stubborn Germany defence as she released Toone, who, cool as you like, lifted the ball over Frohms to send the Wembley crowd into raptures in the 62nd-minute.

Germany were down, but they were most certainly not out, and minutes later, Magull fired a warning when she struck the post. Die Nationalelf remained in the ascendancy, and it was the Bayern Munich midfielder who grabbed the equaliser with an instinctive near-post finish from Wassmuth’s cross with just 11 minutes of normal time remaining.

Extra-time couldn’t be prevented, and tired legs meant there was little of note in the following 15 minutes. But England got their noses in front once more in the 110th-minute, and it was another substitute in Kelly who grabbed the decisive goal, poking home from close range from Lauren Hemp’s corner.